MAYS LANDING – Riding the wave of a two-game win streak, the Camden County College Cougars men’s basketball team took on Atlantic Cape Community College in a hard-fought game all the way to the final buzzer on Tuesday.

CCC traveled to Mays Landing on Tuesday to take on their nearby rival ACCC. This was the Cougars’ first game back in action since Nov. 16, after two players tested positive for COVID-19, and it was also their first game without starter Hunter Blessing, who was off to a hot start to begin the season.

The first half began with no team being able to pull away. It was point for point the majority of the first half, with ACCC ultimately leading after 20 minutes, 33-29. 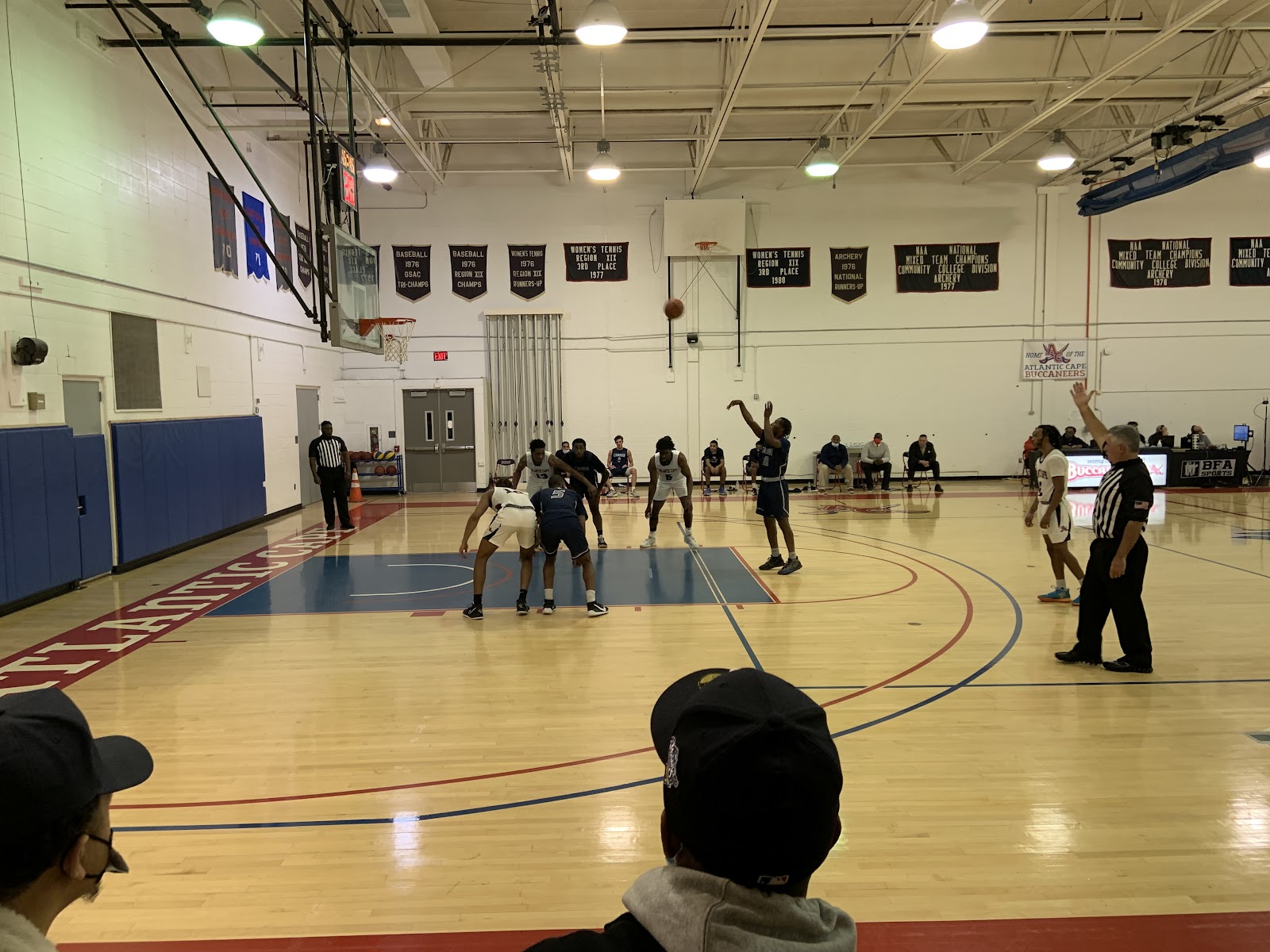 The second half was more of the same thing. Both teams made little runs with the other team responding, but around midway into the second half, the game started to fall into Atlantic Cape’s hands. Fouls and missed three-point opportunities caught up with the Cougs, which allowed Atlantic Cape to take the lead and never give it up. CCC ended up falling to ACCC, 87-78.

After the game, CCC Head Coach Lou Abbattista said several factors contributed to the loss and the team would work on those factors to prepare for the game against Lehigh Carbon Community College on Thursday. 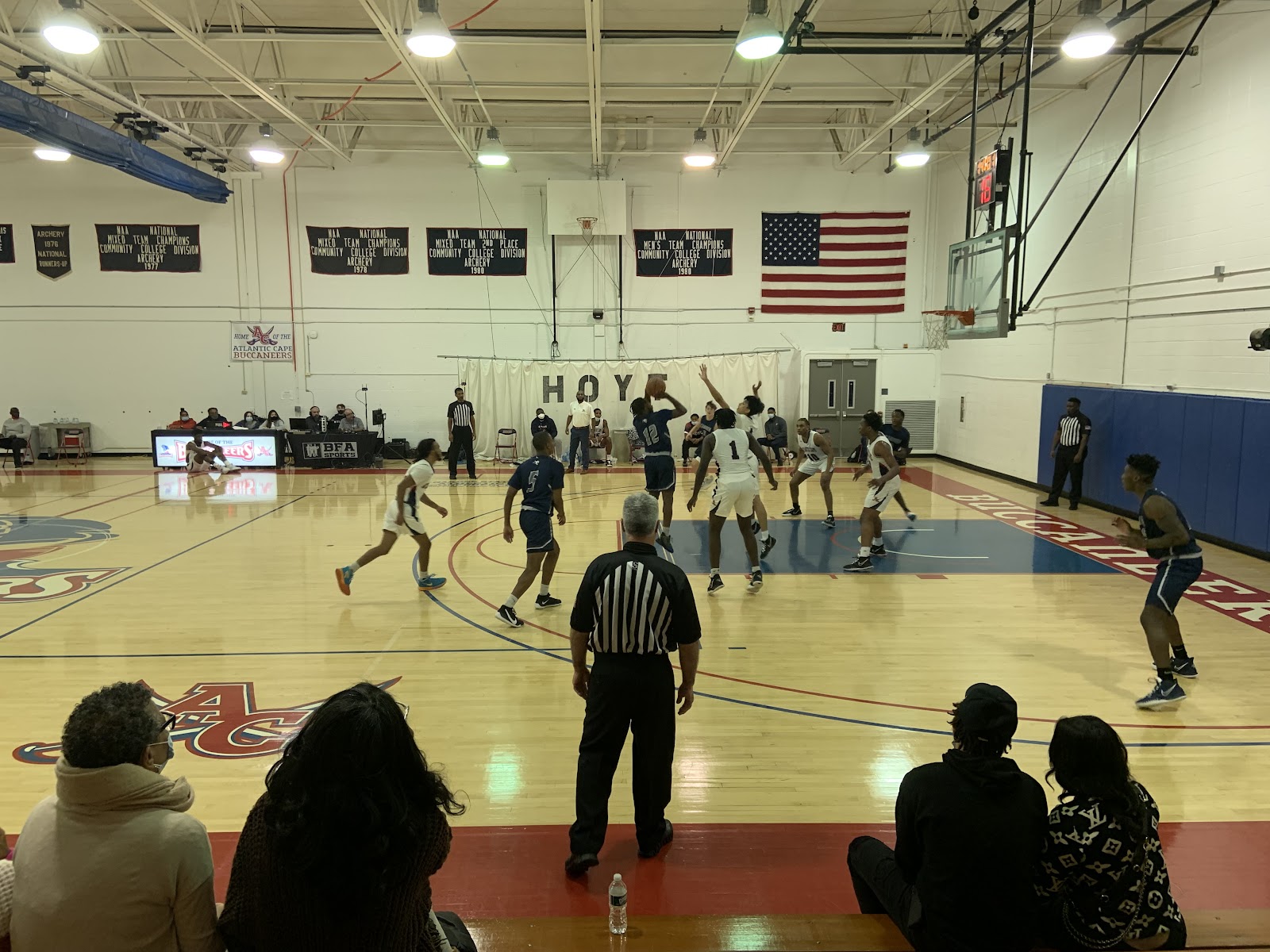 A CCC player goes up for a tough shot. Photo by Trevor Johnston, CCC Journalism Program

After hitting 43% of their three-point shots against Ocean County, the team made only 18% against ACCC. “We talk about it a lot. We try to work on it every day but the layoff of games hurt us,” Abbattista said. “My best teams my eight out of 10 years have only shot around 10 to 15 threes a game, so I think we shot them a little too much but I’m hoping we shoot them better against Lehigh.”

Mahir Sharif, who stepped up with Blessing out of the lineup, put up 23 points, five assists and four steals. “If you look at our box scores, what I’ve been most proud of in 40 years of coaching is that on any given night, four or five of our guys are in double figures. We play that way so you can’t just stop one guy,” Abbattista said. “Mahir stepped up and Patrick Campbell had a good game with 18. We don’t just play for one guy. I mean Tyshon Judge had 34 against Brookdale. The key to Camden County and the way we’ve always won is five or six guys in double figures. I think Hunter coming back will only help us but we’re not sure how many minutes he’ll play.”

CCC had eight more fouls called on them than ACCC, resulting in ACCC having 14 more free throws. ACCC was 23 for 30 from the free-throw line while CCC was 14 for 16. “We spoke about them but on the road you just don’t get a lot of calls. That’s just the way it is,” Abbattista said. “Sometimes there are good fouls but a lot of ours were reach-ins and out-of-position fouls. We’re working on patience and discipline on the defensive end and just being in the right place.”