A Black History Month series, the annual World Cultures Day and a messaging campaign to combat hate have arisen as ways to increase awareness and respect for people of diverse cultures at Camden County College. 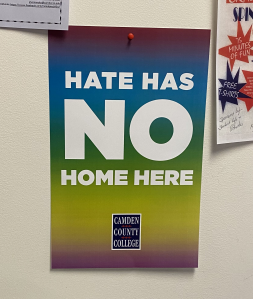 A poster against hate hangs on campus. By Jesse Judd, CCC Journalism Program

In response to a protest that included hateful signs and shouts last fall on the Blackwood campus, posters with the statement “Hate Has No Home Here” began to appear in hallways and on bulletin boards on campus.

In February, the college hosted a variety of events on the Blackwood and Camden campuses to celebrate Black History Month. The events included musical performances, story readings and workshops.

World Cultures Day, an annual event dedicated to embracing the diverse cultures found at Camden County College, is scheduled for 11 a.m. to 2 p.m. April 7 on the Blackwood campus. The World Culture Club leads the event.

“For me, (food is) part of my identity,” said Sandrea Torres, a World Culture Club officer. “It’s big for me to have people know and identify that Mexico isn’t just about tacos.”

World Culture Club Adviser Mary Lee Zawrotny said the club’s emphasis on friendship and acceptance helps people strengthen respect for one another. The club strives “to represent our difference, while showing what makes each country unique,” Zawrotny said.

About 78 countries are represented at Camden County College. The college includes students from immigrant families, exchange students and students born in the United States with roots in another part of the world. 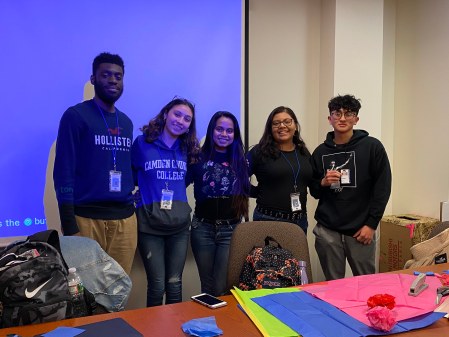