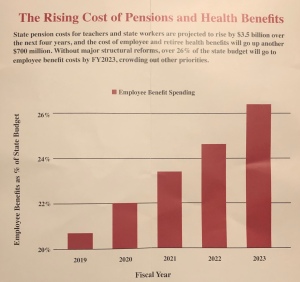 A graph from the Path to Progress workgroup depicts the projected rise of employee benefit costs by fiscal year 2023.

Sweeney expressed concern about the financial status of the state.

“I assembled a panel of experts to look at the finances in the state. They weren’t Republicans or Democrats. They were just policy or tax experts,” Sweeney said. “Gov. (Phil) Murphy went to Wall Street to pitch his budget, and Wall Street recognized and said, ‘Hey listen, it’s better than what we’ve done, but what are you doing about the $115 billion pension deficit?’ There’s no one in this country that has a pension deficit like us. We need to save this state before it’s too late.”

Sweeney is a legislative member of the economic and fiscal workgroup known as Path to Progress New Jersey.

According to the workgroup’s report, New Jersey’s financial issues are a “result of the failure of governors and legislators of both parties to make the necessary pension payments.” The report states the current unfunded liability of $41 billion in the pension funds for teachers and state employees is projected to rise to $51 billion by fiscal year 2023. The workgroup is proposing reforms to solve the problem.

“One of the committees that Jerry (Maginnis) and I were both on is the pension and health benefits committee. We were looking at a couple different options on what makes the most sense. One was moving all new employees into a straight 401k. And we did not choose that option. We went with a hybrid plan, which is what states all across the country are looking at as well,” Pfeiffer said. “Because we’re protecting employees at the lower income end by ensuring they will have some payment down the road that’s a good minimum amount and the rest is going to be a cash balance plan. That seems to be where, nationally, public pensions are going.”

Said Maginnis, “My wife and I are blessed. We’ve got six grandkids. They all live here in New Jersey. I’d love to see them grow up and raise their families here and benefit from the great public schools, resources, the wonderful quality of life our state offers. But I don’t want them growing up in debt. And based on the projectory we’re at right now, that’s what we’re looking at.”