BLACKWOOD – Camden County College administrators are studying the idea of building an indoor athletic arena on the Blackwood campus.

The idea is one of several options being considered to upgrade the college’s athletic facilities, College President Donald A. Borden said last Tuesday. The options are to demolish the college’s gymnasium and build a new arena, update the gymnasium and build a new arena, or refurbish and possibly add onto the gymnasium. Among the spaces where an arena could be built is the area where one of the campus’s oldest buildings, Wilson Hall, was demolished last summer.

At a minimum, Borden said he would like to upgrade the bathrooms, air conditioning, locker rooms and offices in the Papiano Gymnasium, another one of the campus’s oldest buildings, and put in a better fitness center.

“From a revenue perspective, in the summer we would love to be able to host camps,” Borden stated.

College officials and county freeholders have been collaborating on the idea, said Director of Athletics Bill Banks.

“It encompasses a whole realm of things. It enhances the student experience, not just for our students and athletes, but for the general college population, as well as strengthens and builds the connection to the community as well as outside revenue possibilities,” said Banks, who oversees 14 intercollegiate sports at the college.

“Just being around here a whole lot more than we usually are, we would just be involved with the school a lot more,” Penix added.

Wayne Merkh, head coach of cross country and track, said a new arena would provide space for his team members to run indoors.

“In a bigger gym we could do more. In track and field, we could run more. (The gym is) too small to run in right now,” Merkh stated.

Emily Santana, a freshman track team member, said even teams that usually compete outdoors could benefit from a new arena.

“CCC holds a lot of sports titles and stuff, so if we have more facilities to use, that could improve the teams,” Santana stated.

Santana said a new arena could lengthen the amount of scheduled times for team use and Banks said it could expand access for students and community members. It could also provide a nicer venue for graduation than the current location of under a tent, Banks said. 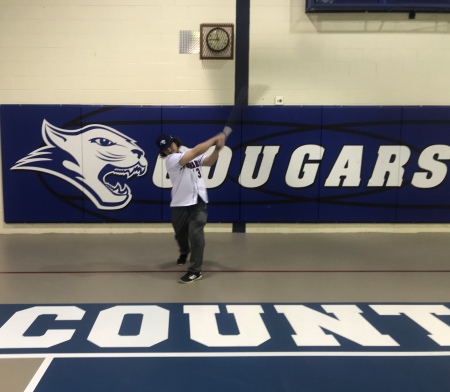 Dalton Penix prepares for baseball season by practicing his swings in the Papiano Gymnasium. By Rene Vettese, CCC Journalism Program