BLACKWOOD – Mold inside some classrooms in Halpern Hall at Camden County College has caused the relocation of classes for students and professors for the foreseeable future. 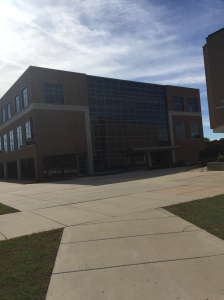 “The problem originated due to the high temperatures, high humidity and large amounts of rainfall that the area received,” said John Steiner, dean of math, science and health careers on the Blackwood campus of Camden County College.

Mold is a part of the fungi kingdom that grows on mostly moist surfaces in its surroundings, according to moldpedia.com.

After college officials were made aware of the presence of mold in Halpern Hall on Sept. 26, a mass email about the situation was sent to members of the college community the following week. On Oct. 4, James Canonica, executive dean of enrollment and student services, explained that record heat and record amounts of rainfall in August and September were the main causes of the issue.

“There were 14 laboratories where growth was detected. Six of these rooms have been thoroughly cleaned, retested and are now back in use. There are eight labs that are still sealed and will require more extensive remediation procedures,” Steiner said.

No timetable exists for when the cleanup of the rest of the rooms will be finished.

“We are working hard to get the rooms ready as quickly as possible but some rooms will most likely not be available until the spring semester. Our primary concern is the safety of our students, faculty and staff,” Steiner said.

College officials are working with four companies that are each working on a different stage of the cleanup to get all the affected rooms back in order.

“TTI Environmental is doing all of the testing in the building. They are taking air samples and swabbing surfaces to look for the presence of mold. These samples are then sent to EMSL Analytical for analysis. AllRisk is the company that is performing the very extensive and thorough cleaning of the classrooms and labs on campus. AllRisk is working with Phoenix Equipment Restoration to remove and clean electronic equipment, microscopes, anatomical models, glassware and other similar materials. These items are taken off campus to be thoroughly cleaned before being packaged and returned to campus,” Steiner said.

“Our students have been terrific during this event and I really appreciate their cooperation when we had to relocate classes,” Connolly said.