BLACKWOOD – About 60 countries were represented at the annual World Cultures Day on April 17 at Camden County College. 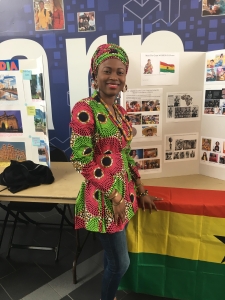 The event, at which students and staff members from around the world share aspects of their countries with visitors, has been held every year for more than a decade. This year’s gathering, which took place from 10:30 a.m. to 2:30 p.m. in the atrium of the Connector Building, had twice as many countries represented as last year’s.

“It’s a great day for our students from all over the world,” said Colleen Doyle, who organized World Cultures Day.

The event provides a variety of ways for participants to share cultures.

“We do a fashion show, so students whose native culture includes clothing that they don’t usually wear here will dress up in their cultural clothing and we announce them and they parade,” says Doyle. Participants also display posters they have made representing their native countries on tables around the room. Some perform music and others serve traditional foods from their cultures. Flags of all the countries represented at the event hang around the room.

Mavis Amegah-Dorr, who represented her country of Ghana at the event, said about her culture, “It means everything. I love my country.”

Amegah-Dorr said this was the third time she participated in the event. The first time, she modeled in the fashion show. The second time, she wore traditional clothing of her country. This time, she wore traditional pieces, such as a scarf in her hair, with a modern twist with jeans. She also made and displayed a poster with information about Ghana in question-and-answer form. the theme was women of her country and the focus was “market women.” She said she believed they are the most influential people in her country and act as the country’s backbone.

Everyone should participate in World Cultures Day, Amegah-Dorr said. “You have something to share.”