Subsidized loans are awarded to undergraduate students whose family income is less than $60,000 a year. The purpose of the subsided loans is to allow students to take out a loan that will not accrue interest while they are in school, searching for a career after graduation or suffering a financial hardship.

Seventy percent of the students who receive subsidized loans are also eligible to apply for a Pell Grant. The Pell Grant is the federal government’s program to help low-income students pay for college under certain guidelines. The most an applicant can receive from a Pell Grant is $5,920 for the 2017 and 2018 award year, according to studentaid.gov.

Faculty secretary and Camden County College alumna Ivis Quann empathized with students who may lose their aid, calling Trump’s budget proposal “another slap in the face from this administration” and saying she believed the cuts would decrease the enrollment at Camden County College.

“As a senior citizen I’m just getting my education because there’s things I want to do in my future. I was given a second chance to get an education,” Quann stated.

The budget proposal would allow the Pell Grant to decrease in value if there is inflation. The purpose of the proposal is to expand the Pell Grant’s “eligibility to include high-quality short-term programs. This would help low-income and out-of-work individuals access training programs that can equip them with skills to secure well-paying jobs in high-demand fields more quickly than traditional two-year or four-year degree programs,” according to whitehose.gov.

Bennett said she will be volunteering for a period of time before she can become a full-time firefighter. To pay her student loans, she has had to seek a part-time job. 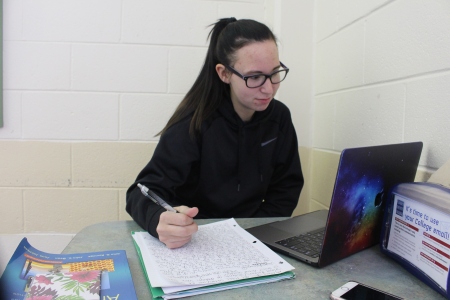