BLACKWOOD – Military recruiters sat down at the Connector Building second floor lobby table on the afternoon of Oct. 16, 2017. This is just one of the ways recruiters have been making themselves visible to the student body at Camden County College.

Hanging on many of the school bulletin boards are flyers titled “New Jersey State Police” that state, “There’s Strong … and there’s #NJTrooperStrong,” offering a way to learn about their fitness requirements and noting they began hiring in February 2017. 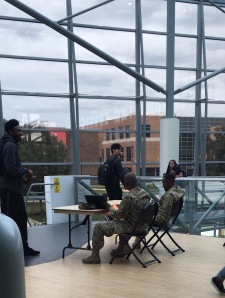 Recruiters from the Sicklerville area talk with a student in the Connector Building upstairs lobby. By Rebecca Green, CCC Journalism Program

Benny Penn, 18, a student in his first semester at Camden County College, said he has noticed recruiters on campus.

“I’ve seen a few people talking to them,” Penn stated, “not necessarily about recruiting but just like normal conversation, but I’m assuming they’re leading up to actually recruiting them.”

While there is no set plan, visits to Camden County College are fairly frequent, said Terrance Anderson, a staff sergeant Army recruiter for the Sicklerville area.

“Every Monday through Friday, we come to either CCC, RCGC (Rowan College at Gloucester County) or Rowan University to talk about opportunities in the Army Reserve,” Anderson said. “We’ll talk about Army benefits, job opportunities, a way for students to offset financial aid loans by utilizing the G.I. Bill tuition assistance program, so that they won’t have those debts that they’ll incur, plus interest, when they graduate from college.”

As to the frequency of recruiter visits, Anderson stated, “Our office covers this area, and it’s five recruiters. Any given day, if we’re not at this school, another group of guys or girls will be at this school doing the same.”

Steve Hetherington, director of public safety at Camden County College, said he has noticed the recruiters who come to campus and has wanted to question them about their involvement. He added when they arrive on campus, they notify the dean of students.

Hetherington noted he was still trying to make sure recruiters didn’t corner students and students didn’t do anything inadvisable while the recruiters were on campus. While Camden County College has been named a Military Friendly School by Victory Media Inc., Hetherington said the school just follows the law in its accommodations of veterans.

“I see them on that spot where people usually put tables, on Madison/Connector, second hall,” Whalen said. “I’ve seen them occur more with their tables this year than I have last year. I think last year, I just saw them at big events where they had career recruiting but now they set up a table at different places very often.”