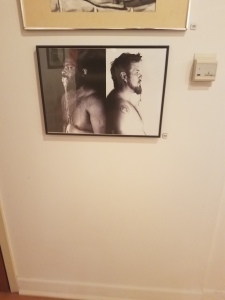 This is a picture of Dakota Grogan and his piece “Contrast by the Mouth.” By Ja’Von Rankin, CCC Journalism Program

The college hosted the art show on April 26 in the Marlin Art Gallery in Lincoln Hall on the Blackwood campus. Eighty-seven pieces of art were on display. The types of art included ceramic, media, clay, photography, drawings and paintings.

Among the pieces was a photograph titled “Contrast by the Mouth” by Dakota Grogan. He said it was a four-by-five camera view that allowed for different viewpoints and angles. He stated he began doing photography around middle school, then started to fall in love with it, noting he used to be scared to display his work “but it got easy and I like to shock people with what I can do.”

One of the winners was Elizabeth Getler. She won best ceramic for her piece “Grace and Symphony.” Getler said she has been interested in art since she was little but got into ceramics in high school, noting she used it as a coping mechanism when she experienced a difficult time. “Grace and Symphony” has two pieces.

“I made the first piece three years ago and I won an award for it here but I always wanted it to be a pair,” she said.

The other winners were: