BLACKWOOD – Two hundred students were inducted into the Camden County College branch of the Phi Theta Kappa International Honor Society at the Blackwood campus on April 13. 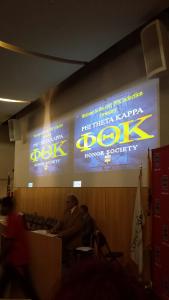 Before the induction ceremony, as a service activity, the new members of the honor society for two-year college students collected 30 textbooks and 30 canned goods. The textbooks were given to Better World Books while the canned goods were given to the Food Bank of South Jersey in Pennsauken.

After the donations were made, the campus adviser of Phi Theta Kappa, Dr. Dan Flisser, spoke about the four tenets that the honor society students abide by – scholarship, leadership, fellowship and service.

CCC President Donald Borden then spoke. He congratulated the families and friends of the inductees for their encouragement and the faculty for their dedication and he shared a message – “Work at something with passion and purpose and results will come your way.”

Branch President Stephanie Angeline then spoke about how much PTK has meant to her. “Being in PTK has taught me more about my community and school then I could ever learn alone.”

After the speeches, the inductees read the oath of PTK to abide by the four tenets. Next, the officers received medals.

“With these medals, carry the ideas of PTK onward and may the force be with you,” Flisser said.

Finally, the inductees received their gold and yellow ropes and signed a document inducting them into PTK forever.