BLACKWOOD – Immediately after assuming his new role as president of Camden County College last summer, Donald A. Borden instituted a new policy in the college, open office hours. The open office hours are a face-to-face monthly interaction session in which people get an opportunity to meet with the president at his office and share their concerns, opinions and ideas about anything in the school.

“It’s about communicating with students, faculty and staff about the issues that are important to them,” Borden explained in an interview at his office in Roosevelt Hall on the Blackwood campus Monday. Borden became the fifth president of the college June 30 and will be installed at a ceremony April 6.

He said though the open office hours are held on a monthly basis, he also makes himself available to people who get scheduled appointments with him because there are emergencies or something critically important.

“I’ve always prided myself in leadership positions of being available, so if there is the need for somebody to see me, I try to make myself available,” he said. 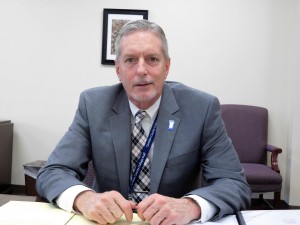 Participating in open office hours to get a chance to ask Borden a question or express a concern comes that easily. The Office of the President sends out an e-mail to the college community announcing when the next open office hours are going to take place. All that is needed is for members of the college community to call the president’s office and sign up to attend.

Speaking about the success of the open office hours, Borden said so far people have taken the sessions very seriously and can therefore say the three-fold reasons of his getting to know people, having a better sense of what is going on collectively in the college community and giving people a chance to get to know him have all gone well.

The president said many of the issues that people bring before him are very important and reflective. An example is the issue of how the college can help its handicapped students move from point A to point B or improve parking opportunities and be sensitive to their needs when bad weather hits.

Another concern that people have raised in the open office hours, Borden said, is the issue of the cost of textbooks. He said the college is very cost-sensitive in relation to its students. As such it took steps to address the situation by instituting the Lend Me Library of Textbooks.

“At the Wolverton Center, we’ve opened the door to students that really have physical problems getting books to get money through our foundation,” Borden said.

Concerns of international students on the myriad of problems they face in college in managing their ways through bureaucratic networks, the lack of financial assistance and physical problems that exist are matters that have come before the president. He expressed his willingness to meet with the international student community to address some of those concerns.