BLACKWOOD – Camden County College is on its way to becoming a university center for more than 10 four-year universities around the Delaware Valley, including Rutgers, Rowan, Drexel, Temple, Stockton, La Salle and Wilmington. As a university center, Camden County College will be the place where students first enroll for their associate’s degrees but can also decide to finish with any four-year college or university of their choice that is in partnership with the college.

This idea is among several visions being pursued by the new president of the college, Donald A. Borden. Borden made the revelation during an interview at his office in Roosevelt Hall on the Blackwood campus of the college Monday.

Borden became the fifth president of the college June 30 and will be installed at a ceremony April 6.

The college currently has a premium partnership with Rutgers-Camden in which students can pursue five different degrees on the Blackwood campus for Rutgers degrees. But because the courses that are offered in this partnership are limited, the college wants to be in partnership with other four-year universities and colleges around the region to allow more flexibility to students about where they want to go. 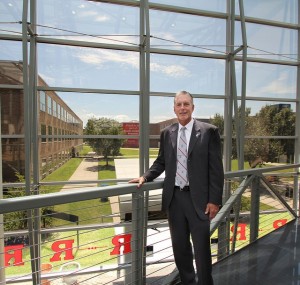 “Being a university center we want to be the hub of the wheel that allows students to come to us and finish anywhere they want to finish to get the program that they need to get,” Borden explained.

The idea is “not just to have partnerships, but really degree-driven partnerships to say that CCC is where you can start your sustainability degree and as long as you follow this path and maintain this GPA, you are assured of going into the programs of partnership universities,” he said.

“With the open enrollment policy, many students come in unprepared, some have job issues, transportation issues, child care issues and physical issues. My aim is to knock as many of these barriers down as possible and give our students every chance to compete and complete,” he said.

Borden said his vision for the college is to see students stay on course and complete their programs and everything related to this surrounds it. This means more aggressive advising to help students understand the decisions that they make related to the courses that they take, more aggressive support through tutoring services or faculty being available to help students to be successful in class, counseling services if necessary, and help for international students in managing their way through the bureaucratic network that exists.

“Everything to me is about completing our students and giving them the opportunity to earn a living wage income when they complete here or transition to a four-year school,” he said.

“We are going to hold the line and keep cost down as low as we can because we know that cost is a challenge for students,” Borden said.

He said, however, though the college has kept tuition low over time, enrolment is tough because there are just fewer students geographically.

“This is a part of the country that’s not growing in population and colleges are very competitive,” he said.

It is for this reason, Borden said, he aims to make CCC as competitive as possible and be the kind of place students want to attend and access the available services for their benefit.