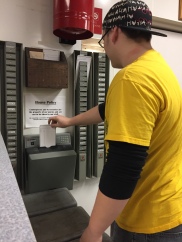 Clinton said she will add 10 million jobs, make sure every American can find a good paying job and increase incomes. Trump said he will create 25 million jobs over 10 years.

In the Oct. 19 presidential debate, Clinton stated, “We are going where the money is.” The Democrat said she wants to give more opportunities to middle class families and small businesses and get the economy moving if she is elected. “We are standing, not yet running,” she said in the final debate.

She stated her plan for more jobs will happen within 100 days of taking office.

Erin Shafer, 19, a Camden County College student, said she believes adding jobs will be more achievable through Clinton’s plan and the 100-day plan will work best.

“Already, I am looking at school debt with community college. The jobs we have now will not help me pay off my college debt. Clinton is promising more jobs, which will hopefully help pay my debt off,” the Lindenwold resident stated. “There are a lack of jobs because it’s hard putting in an application and getting a call back since not many people are hiring.”

Shafer said she believes Clinton has a stronger point on the economy by wanting to make the wealthier, rather than the middle class, pay more in taxes.

In a recent speech at a New York economic club, Trump stated, “Right now 92 million Americans are on the sidelines, outside the workforce, and not part of our economy. It’s a silent nation of jobless Americans.” The Republican said if he is elected, “Instead of driving jobs and wealth away, America will become the world’s great magnet for innovation and job creation.”

James Keeny Jr., 21, an employee at Paris Caterers who has enrolled as a student at Camden County College for next spring, said he believes Trump would be better for adding jobs as president because he is a businessman who has created many jobs, some in New Jersey, and whose properties are worth millions of dollars.

Keeny said he believes everyone would have an equal opportunity in finding employment under Trump’s plan.