Camden County College Men’s soccer team has been the dominant team in the region lately, and one man has been at the heart of it: coach Giuseppi Lamberti.

Lamberti has been the team’s coach for six years and has been a huge success.

This year, the team had a remarkable 17-4 record.  Lamberti attributed the team’s success to the players’ high level of talent, and the family nature of the team.

The team has not lost a conference game in the last two seasons. As a result, Lamberti was awarded the Garden State Athletic Conference Coach of the Year for the third consecutive year.

Lamberti said he felt honored to have been given the award and it motivates him to continue to improve his team.

Interestingly enough, Lamberti was not avtively seeking a coaching role around the time he was asked to join.

“I actually stumbled upon the job.  The trainer called me some years ago, asking if I would be willing to take a role as an assistant coach,” Lamberti said.

Lamberti’s initial reaction was not positive.  He was not interested in coaching.

After much deliberation, however, he called the former head coach, and after a long discussion took the job.

As the years went on, recruiting became an easier task, and the team’s returning players helped the newcomers buy into his playing style.

Going forward, Lamberti said he plans to encourage his players to work in the off-season and play regularly.

“You never know what your team will look like from year to year.  It’s a two-year school, so half of the guys are gone, and you can’t know who will be eligible to play.  I have to recruit 40 guys a year, so basically, it’s a new team every time,” he said.

Team captain James Whitty had nothing but praise for his coach.  The veteran Whitty was picked as a captain at the end of pre-season due to his good communication with the team, on and off the field, according to Lamberti.

Whitty admired Lamberti’s coaching and recruiting ability, noting his tough coaching style, but also recalled his kind, friendly nature between with his players.

Whitty called his time working under Lamberti, “a great, and fun learning experience.”

The college’s team has players from several different countries.  Whitty’s experience was “tough at first, but it ended as a very enjoyable experience,” he said. 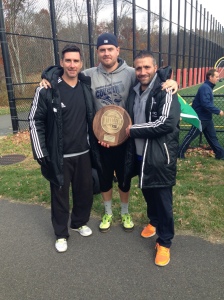