BLACKWOOD – The Camden County College Foundation hosted a successful Designer Bag Bingo on the night of Nov. 13 in the Connector Building Atrium of the Blackwood campus. 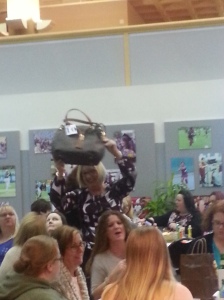 Helen Erskine volunteers at the bingo, displaying to players the bag they potentially can win. By Diana Cielesz, CCC Journalism Program

The event was considered a sell-out, all 250 tickets were sold prior to the event and every table was full. Most of the attendees were women, but a few men were there, too.

“We calculated that $12,500 was raised after expenses. The total amount may still rise if any more donations are sent in,” said Myra Tryon, foundation secretary and bingo coordinator. All of the money raised goes directly back to students, funding scholarships and academic programs at the college.

To fill the night, 10 rounds of bingo were played, door prizes were raffled off, a 50/50 drawing with a prize of $550 was held and 20 baskets ranging from a Walt Disney World vacation to a basket filled with dog treats and toys were raffled off. In some cases, a round of bingo had more than one winner. In the event of a tie, depending on the round, the player with the higher or lower card serial number was declared the winner. Runners-up received a wristlet of their choice.

Lori Cerbo won a burgundy Michael Kors bag in round two of bingo. “I am very excited about the bag I won. It is the perfect color for me and it is a beautiful bag,” Cerbo said.

Cerbo wasn’t the only winner of the night. Some tables won more than one prize and women weren’t the only winners going home with a new purse. In one case, a man won a round of bingo, winning a hot pink Coach bag.

Everyone in attendance was having a good time. There was much laughter, talking, and the complimentary chocolate fountain was enjoyed by many.

Linda McKelvey doesn’t usually attend bingos but wanted to support the college and go for a fun night out. “I had no idea what to expect coming to the Designer Bag Bingo, but (the college’s) bingo exceeded my expectations,” McKelvey said.

Melissa Daly, Camden County College development associate and head coordinator of the bingo, was surprised the event went smoother than expected. “I am very pleased that we had a great turnout and everyone had a great time,” Daly said. “We are definitely going to host another bingo again.”