BLACKWOOD – Cellphone use in class has become a distraction for Camden County College students and professors. Professors have implemented and are enforcing strict regulations about cellphone use in class, including kicking out of class those who do not abide by the rules. Some students aren’t accepting these consequences without a little backlash.

Drew Jacobs, a communications professor at Camden County College, has strict rules about cellphone use during class. He said he takes this issue so seriously because “using your cellphone during class isn’t going to help you pass or pay attention, so just don’t do it.”

His syllabus contains a detailed description of the repercussions of cellphone use in his class, including: “The first instance of the use of any electronic device while in class will result in dismissal from class and 25 points deducted from your final grade.”

Isaiah Paskins, a 20-year-old student who has been kicked out of class for cellphone use, said recently, “I pay for this class so if I chose to be on my phone in class that’s my own fault if I fall behind. I shouldn’t be reprimanded for checking a text message or two in class.”

Other Camden County College professors, such as James Patrick, a public speaking professor, have even stricter policies about cellphone use in class, such as complete removal from the course.

While some students dislike the strict policies, others agree with them.

“If you pay for the class you shouldn’t want to waste your time and money playing on your phone. Unless it’s an emergency, your friends can wait,” said Jordyn Cohen, an 18-year-old student in one of Jacobs’ classes. 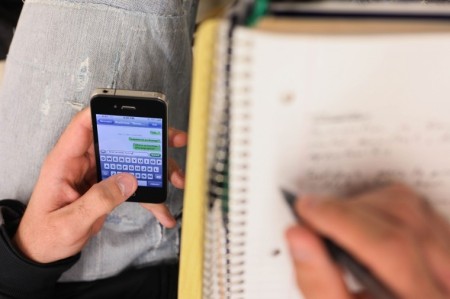