BLACKWOOD – A grant from the Camden County Cultural and Heritage Commission will allow Camden County College to stage a big production this semester. At the same time, the college is shifting its focus to casting only students in its productions, says the head of the theater department.

The big production at work will be “Charlotte’s Web,” the literary classic written by E.B. White and adapted to the stage by Joseph Robinette. The show will open at 7 p.m. Dec. 4 in the Little Theatre. The location seats more than 85 people and is in Lincoln Hall on the Camden County College Blackwood campus.

For the first time, the Little Theatre will have animation that will serve as part of a living background behind the actors dressed as animals in the production. The animation will be akin to a blue screen used for special effects in motion pictures.

Because of the grant, tickets for the show will be free through Facebook. Admission is normally $10 for CCC students with a valid student ID, senior citizens and children and $15 for the general public.

About 45 students auditioned for roles in “Charlotte’s Web” or for roles in the one-act festival that included “Bobby Gould In Hell” and “Almost Maine” on Oct. 16 to 18. The lineup of shows usually has two in the fall and one in the spring. 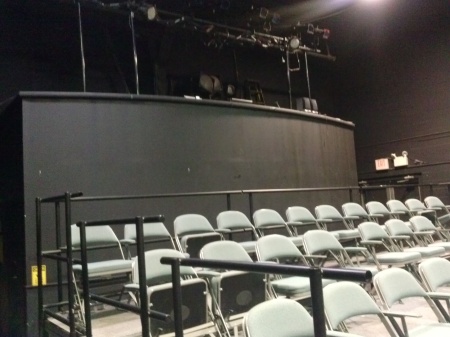 The Little Theatre is being set up for an upcoming show. By Aniell Ortiz, CCC Journalism Program