GLOUCESTER TWP. – A plan to build a drug and alcohol rehabilitation facility has Gloucester Township in an uproar. Recovery Centers of America CEO Brian O’Neill wants to build the facility on Peter Cheeseman Road near Camden County College’s Blackwood campus. 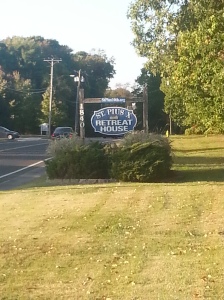 Recovery Centers of America wants to locate a rehabilitation center on the former site of the St. Pius X Retreat House in Blackwood. By Victoria Ackerly, CCC Journalism Program

Recovery Centers of America recently filed a lawsuit against Gloucester Township in state and federal courts. Gloucester Township denied O’Neill’s request to renovate 1840 Peter Cheeseman Road, claiming it would not comply with zoning regulations. O’Neill claimed that was an unjust assessment.

O’Neill is suing using the Fair Housing Act and the Americans with Disabilities Act, claiming drug and alcohol addicts qualify as disabled citizens under the laws.

“This issue is much greater than simply NIMBYism (not-in-my-backyard-ism). Last year alone, 1,310 NJ families lost loved ones to heroin, cocaine and prescription drug-related deaths. Those voices did not show up in opposition. But they are our sons and daughters, mothers and fathers. We fight for them and will continue to fight for them,” O’Neill said Oct. 6 in a press release after filing the lawsuit.

The location for the planned facility is the former St. Pius X Retreat House directly across the street from the CCC Blackwood campus.

CCC surgical technology student Christina Poremny said, “I understand why people don’t want it. They’re afraid of drugs coming into their community, but it’s also a good thing because there are no drug facilities in the area. I don’t feel it will do anything to the school. Most students probably won’t even notice it.”

Gloucester Township is denying the claim it rejected the proposal illegally. The township’s mayor had no comment on the situation.