Utica, New York is where the college men’s soccer nationals are held.

The weather is so cold that it begins to snow, but that doesn’t stop the Camden County College men’s soccer team from winning.

The team not only won the nationals, but became the first team in the school’s history to do it twice. They now rank fifth in the county.

“It took a lot of hard work, but we were able to pull it though,” Giuseppe Lamberti said about the team’s 18-2 season. An assistant coach for two years, Guiseppe has been the head coach for five years. He not only coaches, but still plays the sport he loves, and has been playing for more than twenty years.

CCC scouts for talent all over the world. In countries such as Brazil and Australia, the school is constantly looking for new talent.

Many of the players from overseas have to submit videos to their coaches and are picked to come and try out. Out of the 50 players who try out, 25 will make it on to the team.

Midfielder ViniciusBrito,was scouted all the way from Brazil. “I’ve been playing since I was 2 and have no plans on stopping. He wants to eventually play for Wilmington, Delaware but wants to get his associates degree.

Brito wishes that more students would come out for the games. “The sport is such high intensity and high paced, and people might find they’d actually enjoy it.”

With great winning comes great sacrifice, Brito mentioned the strict eating schedule that he has to maintain once the season starts.He also has to attend to his studies. 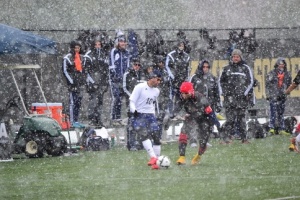 (Brito in white playing in the Nationals)