The growing popularity of electronic cigarettes has added an aspect to Camden County College’s prohibition on the use of tobacco and tobacco-like products on all its campuses. 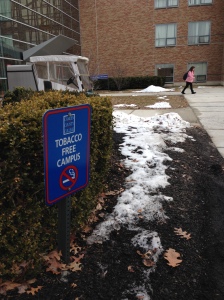 Tobacco-free campus signs are posted near all buildings on the campus. By Jessica Greco, CCC Journalism Program

The Board of Trustees of Camden County College adopted the prohibition several years ago. Although they differ from conventional cigarettes, e-cigarettes and vaporizers are generally used with cartridges of nicotine and added flavors.

Despite signs around campus and the threat of fines, some people still violate the rule.

“We try not to be an enforcement arm,” said John Schuck, assistant director of public safety. “We try to educate rather than sanction.”

Public safety officers issue a warning the first time someone is found using tobacco on campus. “The next time that it occurs, a ticket is issued. The fees are $25, $50, and if it does not stop, it is handled by the dean,” Schuck said.