BLACKWOOD – The partnership between Camden County College and Rutgers University-Camden announced Sept. 29 will grant conditional acceptance to Rutgers-Camden to every student who will enroll at Camden County College provided they maintain a 2.0 grade point average and meet program requirements. But what about CCC students who have a major not offered at Rutgers-Camden? 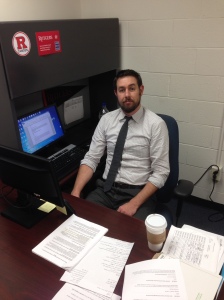 “I’m here to advise students on any pathway to Rutgers, not just Rutgers-Camden, though that is what the agreement entails,” said Adam Brown, the academic program manager, citing communications and engineering as two majors not offered at Rutgers-Camden but offered elsewhere at Rutgers. “Just because the agreement doesn’t include Rutgers-New Brunswick doesn’t mean we can’t talk about how to apply or how to transfer.”