On April 11th, an organization called Fantastic Friends threw an event for volunteers at the Aloft Hotel in Mount Laurel. The event began at 7:00pm with information regarding the Disney themed prom being held on June 13th for special needs teens in the South Jersey area. There was also active volunteer speakers who talked about their experience with Fantastic friends. The whole event lasted until about 10:00pm with dancing and desserts.
Fantastic Friends is a group for special needs teens, founded three years ago by Marissa Hacker because of her twin brother Matthew. Matthew has autism and has a hard time making friends, so Marissa created a place where he and other kids like him could have fun with their “neurotypical” peers. The organization hosts an event once a month and they go all over South Jersey. So far they have been to the aquarium, gone bowling, hosted themed events, and had costume parties. When they had first started, they had ten teens with special needs and ten volunteers, and now they have 35 special needs teens and 35 active volunteers. They say they aren’t just an organization, they are a family, so members are called friends and volunteers are called volunteer friends.
Marissa Hacker, speaking on April 11th, about how the Fantastic Friends Organization got started, what they have done so far, and the next event coming up which is the Disney Prom on June 13th. 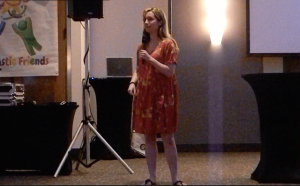 Gabe Costa, a Fantastic Friend since the beginning who was diagnosed with aspergers when she was two but didn’t find out until she was in sixth grade. She is speaking about her disorder and how her experience with Fantastic Friends has been. 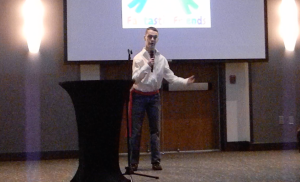 Mitch Kofsky, also a Fantastic Friend since its start, has a condition called Familial Dysautonomia which is a Jewish Disorder where your heart rate can go up and down, along with an inability to make tears and speech problems. Mitch is talking about how his condition has affected his social life and how being a part of Fantastic Friends has really helped him. 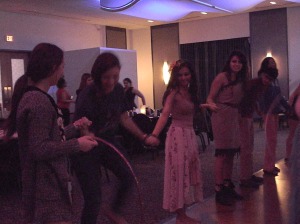 Volunteer Friends participating in a group challenge to get the hula hoop from one end to the other and back again without breaking hands. Fantastic Friends likes to show how teamwork is not only essential in games, but in life too.