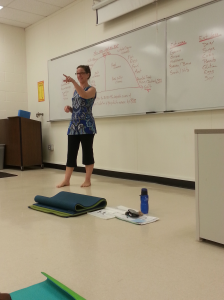 Before becoming a yoga teacher, Berni was a student at Rowan University in Glassboro in 1979. Berni was studying art and planned on becoming an art therapist. During that time, Berni was working with emotionally disturbed teenagers.

Berni threw her back out during work, went to the doctor and was diagnosed with chronic sciatica. Chronic sciatica affects the large sciatic nerve located in the lower back, causing shooting pain and numbness, making it difficult to stand up, and has the potential to get worse if untreated. Berni’s chiropractor recommended an exercise program to do regularly. That’s when Berni had a revelation. Berni knew at that moment that yoga would be the solution to her chronic sciatica.

The chronic sciatica pain never happened again after practicing yoga. Not only has yoga helped her physically, but also it has also helped her spiritually. Yoga has helped Berni to deal with and manage her anxiety and self-esteem issues, obstacles she had to overcome in the beginning of her teaching career. But she has triumphed and has helped many other people deal with their self-esteem and emotional distress.

Elizabeth Vollmar, a student in Berni’s yoga class, had never practiced yoga but found inner peace and strength from Berni. Vollmar said, ”During my life after yoga, I find I am at more peace with my mother’s passing. I like myself more and I am nicer to others.”

Berni’s motivation to help others goes beyond Camden County College. She also teaches yoga to special needs adults at Jubilations Creations, a recreational center in Collingswood.

Berni tries adding new poses and positions each year to make her class different. She added the Kirtan Kriya, a meditation chant, and the Moon Salutation, an advanced pose, to her beginners yoga class.