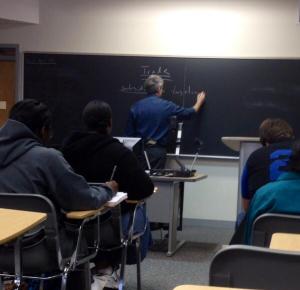 International relations, or IR, is the study of different countries around the world and their relationships to one another. Whether it be economics war, or human rights, IR attempts to break these concepts down and understand why they happen the way they do. It asks the questions, “What causes war?” “Why is there such a huge wealth gap between the different countries of the world?” and perhaps the most important question, “Can we do anything about these global conflicts?”

Hughes obtained his doctorate in international relations from the University of Delaware. He is in his 10th year of teaching at Camden County College. As to why he had decided to begin the class this year, he said he was previously able to study at Princeton University for a fellowship, which gave him more information to work off of and focus on in a classroom setting.

Student Aislinn Fair, in her second year at Camden County College, had nothing but praise for the professor, saying, “I love his lectures. He’s very succinct and no nonsense. You can tell he’s sharp as a tack, and his laid-back but put-together dynamic commands respect.”

In the class, the material is broken down into three elements: the basic concepts, international conflict, and international political economy. Students take three quizzes, as well as three written exams relating to those IR topics. They are expected to read chapters from the textbook accompanying the information given in the lectures, as well as take notes during class.

The international relations class is held from 11 to 11:50 a.m. Mondays, Wednesdays and Fridays in Madison Hall. Hughes said the class is expected to run every spring semester.

Hughes said he hopes students will take away from the class that global politics are important and it’s no longer an option to look upon America in isolation.

About the class, Fair said, “My outlook on global politics has definitely changed. For one, I can now go into a conversation about global politics and hold my own. I feel much more confident taking about both current and historical events than I did prior to the class.”