BLACKWOOD – Visitors clapped their hands and tapped their feet as scholars showcased their talent at the Swing Jazz event held Monday evening, April 7, in Civic Hall on the Blackwood campus of Camden County College.

The Swing Jazz event was part of the America’s Music six-week series. The evening began with a performance, it continued with films that explained the history of jazz music, and it ended with an audience discussion.

Beginning with the blues and moving toward Broadway jazz music, Billingsley and his band showed the audience how the language of jazz has developed over time. The performers used the term “jazzing” when showcasing how they made simple melodies more creative.

“For a three-piece band, it was impressive to see how much sound they created.” said CCC alumnus Gabriel Garcia.

When the band began to play, putting their own twists on classics such as “Danny Boy” and Carole King’s “Will You Still Love Me Tomorrow?” the entire audience began to dance in their seats.

“If your body isn’t involved, you’re missing part of the experience.” said Billingsley. “Jazz is supposed to connect that way.”

Later, the audience quieted down to learn the history of jazz. The first film, Ken Burns’ Jazz series, showed what many performers had to do to achieve success. It also exposed the audience to the racism that impacted many musicians.

The second film, International Sweethearts of Rhythm, was about an all-women jazz band. It revealed the discrimination that they faced while trying to compete with other jazz bands. Due to discrimination, there is not much knowledge of these female jazz bands.

“I didn’t know of any at all,” said CCC student and Jazz Ensemble member Greg Mele. “There aren’t many all-girls bands in any genre.”

The films generated many of the questions that guided the discussion. The audience was very eager to discuss with the scholars and one another. Many who had spoken agreed that jazz music was the greatest and many others were moved by the performance and the films.

“Before the event, I was thinking ‘Maybe some people will come out,’” Billingsley commented. “But this has become such a success.” 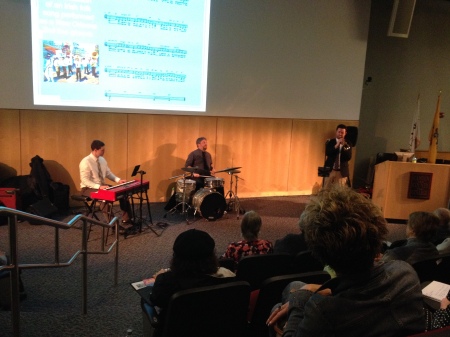