BLACKWOOD – A recent survey in a public relations class at Camden County College found mixed opinions on whether the campus should have a designated smoking area. 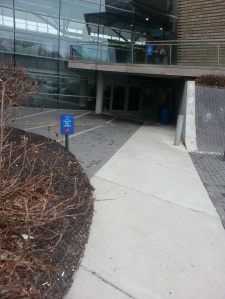 “Tobacco Free” signs at the entrance of Madison Hall remind students about the “No Smoking” policy. By Cindy Son, CCC Journalism Program

A “No Smoking” policy took effect 14 years ago at CCC. The policy was created to promote health and awareness, said John Schuck, assistant director of public safety.

“We tried to have a designated smoking area, but students were not obeying it, smoking cigarettes before reaching the designated area,” Schuck said.

As of March 3, five tickets had been issued this semester to students violating the “No Smoking” policy on the Blackwood campus.