In our world of three-minute workouts and drive-through liquor stores, there has arisen a trend of assigning days of celebration to otherwise meaningless events. Chocolate Caramel Day and Snowman Burning Day are just two of the days that come to mind when considering these frivolous and, often times, funny holidays. World Water Day, however, does not fall into these categories. While it is still a burgeoning event, the issues it raises are anything but superficial. Although nationally observed on March 22, Camden County College’s Environmental Club has taken it upon themselves to dedicate it three days of celebration on the Blackwood Campus in February, March and April for our body’s favorite liquid.

World Water Day was internationally incepted in 1993 by the United Nations General Assembly. Its initial goal was to raise awareness of water issues and implement United Nations recommendations regarding the world’s water resources. Each year, a different UN agency is given the responsibility of choosing an international issue affected by water and creating proposals on how to curb or eliminate the problem. One example of a UN suggestion that is proposed annually is an initiative to try not to use tap water for the entire World Water Day. This idea, along with World Water Day itself, has been adopted by schools and organizations across the United States, including Camden County College.

At the forefront of the celebration at CCC is the school’s Environmental Club, “a group whose focus is to help students become aware of their direct impact on the environment and to help promote environmental awareness within their community.” It is their hope to bring awareness to the billion people worldwide who live in chronic hunger due to the inadequate or unsanitary condition of their water. They also wish to raise consciousness of the different types of food that require disproportionately greater amounts of water to prepare. These foods, such as beef and wheat, account for most of the 2 to 4 liters of water we “drink” per day. According to the Environmental Club, by cutting down on these wasteful foods we are ultimately sharing water with those who need it more.

These relatively simple tasks are garnering praise from Camden County students for the effectiveness they have in conserving water. Bailey Pfeifer, a second-semester student at CCC, thought, “water conservation meant not showering or going far out of your way not to use water,” a seemingly typical sentiment among first-time conservationists. He was surprised “a few little things throughout your day can go a long way towards helping someone less fortunate.” Pfeifer, however, was quick to add he still plans to wash his hands in the bathroom. Keith Hurley, a Camden County student in his final semester, also applauded the efforts of both the Environmental Club and World Water Day. He believes “when so many of the world’s problems come from insufficient or unhealthy water resources, they should really be having World Water Month.”

Although two of the Environmental Club’s World Water Day celebrations have already passed, Camden County College students will have another opportunity to learn how to become water conservationists. The third World Water Day celebration will take place at 3 p.m. April 26 in the Community Center of the Blackwood Campus in room 202A. Admission is free and registration is not required. For more information, join the Camden County College Environmental Club Facebook page for updates. 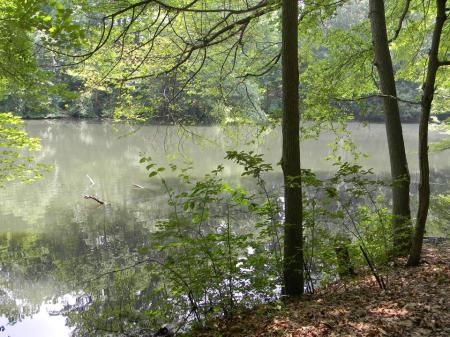 World Water Day hopes to protect and celebrate water in all of its forms, including this small pond in Haddonfield. By Ryan Dickinson, CCC Journalism Program